Restitution of 26 works to the Republic of Benin

In 2018, the President of the French Republic, at the proposal of the museum and the Ministry of Culture, announced the restitution of 26 works from the royal treasury in Abomey - the spoils of war of General Dodds taken from the palace burned down by King Béhanzin after the fighting of the Second Franco-Dahomean War in 1892 - to the Republic of Benin.

The administrative authorities had one year maximum, from entry into force of the text, to transfer these works to the Republic of Benin.

On 9 November 2021, the transfer of ownership was signed at the Élysée Palace by Presidents Emmanuel Macron and Patrice Talon.

The 26 works arrived in Benin the following day, where the official reception ceremony was held.

This process was conducted in complete collaboration with the Beninese authorities and the Beninese curators in charge of the works. 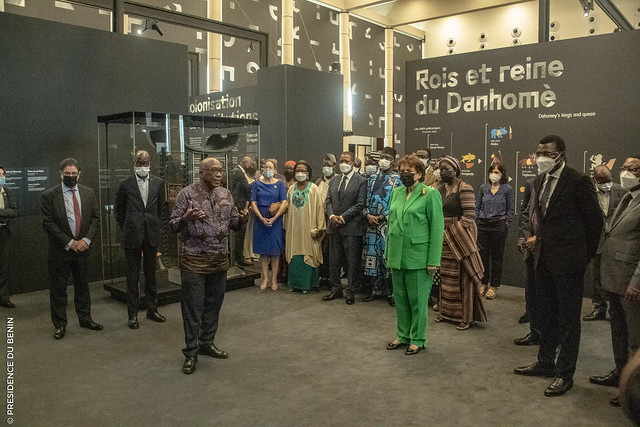 The large bocio royal statues, once coated with magical substances, protect soldiers. These hybrid figures, half-man half-animal, bear the emblems of the kings: the cardinal with its flame-red feathers for King Ghézo, the lion for Glélé, and the shark for Béhanzin.

Before going into combat, the soldiers promised them victory and trophies for the box of courage. These large statues, which emphasise the superhuman nature of monarchs, sometimes led armies into battle and took part in the annual procession of the kingdom’s wealth.

Made in the Yoruba style, this monoxyle throne (carved from single blocks of wood) comes from Cana, twenty kilometres from Abomey. Considered sacred, this city was regularly visited by the kings of the dynasty for ceremonies and rituals. Some kings had second palaces in Cana. It also acted as a stopping place for prisoners destined for the slave trade in Ouidah, on the coast.

This work represents the king, surrounded by his servants, under a parasol overlooking a line of shackled slaves. The anonymous Yoruba artist exhibits the style, and origin, of a neighbouring region conquered by the Kingdom of Dahomey.

The walls and doors of the palace of Abomey were decorated with allegoric motifs alluding to the divinities of the Fon pantheon, to the great achievements of the kings, and to memorable historic events. These images compared the living king to his illustrious ancestors and voodoo divinities. These doors covered the openings on Glele's ajalala (palace).

DOORS FROM THE PALACE OF KING GLÈLÈ

During the ceremony for the late kings, the king sat on this throne placed on a rostrum. The sculptor was inspired by the Akan (Ghana) and Portuguese styles.

Door from the royal palace of Abomey

Resources produced by the museum

This exhibition presents the artists of the kingdom of Dahomey (1600-1894), in present-day Benin, through 82 works and 8 old graphic documents.